I haven't posted for a minute but I'm continuing to train fine considering the weather has been less than ideal for sprinting.
Today was contrasting uphill/ downhill 100's on (maybe) a 2% grade. These were broken up into sets of two (also called split 200's) with a 1:00 to 2:00 rest between each. Then 6:00 to 8:00 rest between sets. I'm finding that the typical one minute rest between split intervals isn't productive at 8000+ ft altitude, I think it only inhibits performance. That 60" rest protocol is based on an assumed sea level altitude with the goal of neural and ATP recovery but still allowing high lactate levels, never a mention of actual O2 uptake. At high altitude though O2 becomes a real issue. After 60" rest I'm gasping for breath and it's actually peaking at that point. Today, between 100's, I waited until I actually caught my breath and was no longer feeling light headed which was coming on after about 1:30.
I've never read anything about contrasting up/down hill workouts so I was sort of making it up as I went. My idea today was to use the downhills to allow me to run faster in a fatigued state than I could on a track, not only in terms of the individual 100's but also the volume. 10 X 100 is a ton of sprinting and I was hoping the downhill would allow me to eek out more reps. So I ran my first 100 UPhill/ rested 1:00 up to 2:00/ then ran a 100 DOWNhill. The first 100 was an aggressive but relaxed effort, no time goal. The downhills were just max effort, no time goal. One other reason for this workout was that I don't have access to a flat 100 meters unless I drive an hour round trip.

Not sure if this is an effective workout or not. I'll find out in a few months, but of course one workout has little impact on overall performance. It was fine though and I had fun. However, I am sure that the downhills allowed me to run more total meters faster than I could have on a track. I averaged 13.0 seconds for 10 X 100 (or 26" for 5 X 200 meters, not really but sort of) which I doubt I would be able to do otherwise. I'm also not rested, previous workouts have been solid so doing this well in a fatigued state is quite good for me.
One thing to note is that downhill sprinting is as violent as it comes. I've read that pushing downhill sprints too aggressively is a "potentially career ending" exercise. I've also read that injury rates increase 3600% when fatigue begins to inhibit nervous system economy. So basically downhill sprinting when fatigued increases injury risk by a gazillion percent. It's probably best not to try it. 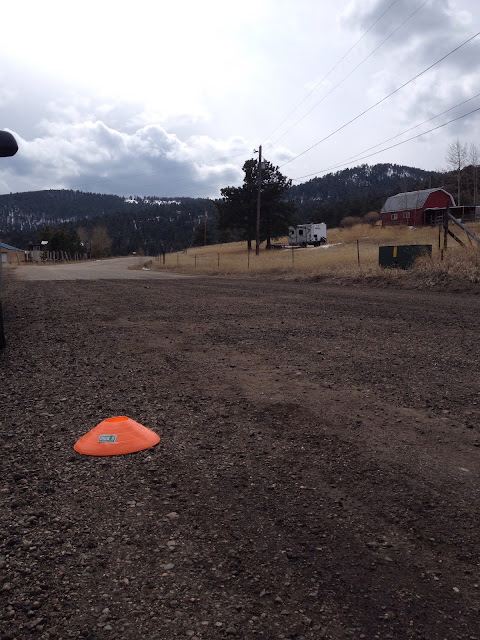